Two Boats and a Helicopter 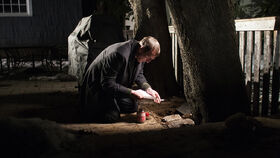 "Two Boats and a Helicopter" is the third episode of Season 1, and overall the third produced hour of The Leftovers. It originally aired on July 13, 2014.

In the face of dwindling church attendance and threats on his life, Reverend Matt Jamison continues to preach his gospel: that many who disappeared in the Departure were sinners and not saints. Matt’s campaign is detoured when he learns he may lose the church to foreclosure, forcing him to launch a desperate, last-minute plan to come up with the cash to keep it.

Retrieved from "https://the-leftovers.fandom.com/wiki/Two_Boats_and_a_Helicopter?oldid=8134"
Community content is available under CC-BY-SA unless otherwise noted.