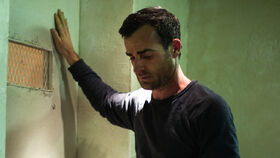 "The Prodigal Son Returns" is the tenth and final episode of Season 1, and overall the tenth produced hour of The Leftovers. It originally aired on September 7, 2014.

An unexpected ally helps Kevin get out of a jam near the town of Cairo. Meanwhile, an elaborate Memorial Day initiative by the Guilty Remnant plunges Mapleton into chaos. Also, Holy Wayne grants a final wish, Tom copes with his new reality, and Nora makes a life-changing decision.

Retrieved from "https://the-leftovers.fandom.com/wiki/The_Prodigal_Son_Returns?oldid=8216"
Community content is available under CC-BY-SA unless otherwise noted.