The Garveys At Their Best 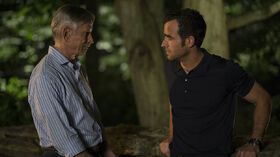 "The Garveys At Their Best" is the ninth episode of Season 1, and overall the ninth produced hour of The Leftovers. It originally aired on August 24, 2014.

The events of this episode take place in the final days before the Departure. The episode offers a glimpse into the lives of the characters before they were forever changed by the events of 14 October, 2011.

Kevin Garvey is on a morning jog and stops to smoke in secret before returning home. He notices a lone deer staring at him, with something shiny stuck to one antler. When he returns home, Laurie Garvey makes breakfast and reminds Kevin they have an appointment with a puppy breeder. Kevin takes Jill Garvey to school, and she informs him she can smell the cigarettes before she leaves.

Laurie, a psychologist, is about to begin a session when she receives a courtesy call from her doctor. The doctor tells her she is running out of time for an unspecified appointment, and Laurie explains she needs to talk to her husband first. Laurie begins her first session of the day - with her patient Patti Levin. Patti explains to Laurie that she feels something very bad is going to happen. While she's had similar feelings before, Patti says she feels "this is the big one." Laurie believes this may be continued anguish from Patti over being kicked out by an abusive partner. Patti disagrees and says Laurie can also feel "something's wrong...inside you." Laurie denies this, unconvincingly.

Nora Durst, her husband Doug, and their two young children Erin and Jeremy, get ready for school while Nora also prepares for a job interview. Kevin takes a smoke break while on duty, when children and parents suddenly run screaming from a nearby pre-school. Kevin ventures into the school and finds extensive damage from a wild deer's rampage. At the police station, Nora is being interviewed by Lucy Warburton, who is about to begin her campaign for mayor. She wants to know Nora will be fully committed to the job and Nora insists her family will not get in the way.

Mapleton Police of Chief Kevin Garvey, Sr. enters the room and asks Warburton if she'll be at his party tonight. She remarks he's not supposed to know about his surprise party and says she'll be there. Flustered, she insists to Nora that she and the police chief are just friends. Kevin Sr. informs the station that wild deer are on the loose and they have permission to put the animals down on sight. Kevin Jr. argues that it is only one deer and it doesn't need to die. Kevin Sr. gives his son permission to tranquilize the deer if he can catch it. Kevin Jr.'s colleagues put him down, considering his efforts to be pointless.

Kevin Jr. then gets a call informing him that his stepson, Tommy, has been arrested after a physical fight. Kevin takes Tommy out of police custody and begins driving him home, but notices an injury to the back of his head. Kevin then drives to the house of his Tommy's biological father, Michael, who struck him. Michael explains that Tommy keeps coming back and this time he was drunk. Kevin drags Michael to the ground and threatens to kill him if things ever turn physical again. Kevin decides he and Tommy shouldn't tell Laurie what occurred.

Laurie is consulting with the puppy breeder, Gladys, from whom she and Kevin are considering getting a dog. When Kevin texts her to say he won't be there, Laurie begins to cry. At home, Laurie informs Jill she won't be able to make it to her science fair as she has a doctor's appointment. Jill comforts her when she becomes overwhelmed with guilt. Tommy surprises Laurie and Jill, then the family begins preparing Kevin Sr.'s party. Later that night, at least 50 of the town residents gather at the Garvey's to celebrate Kevin Sr., but he is overjoyed the most to see Tommy. One of Kevin Jr.'s colleagues further embarrasses him about the deer, this time in front of Laurie, who is confused by Kevin's intentions.

Matt Jamison delivers a rousing speech to congratulate Kevin Sr. on his "Man of The Year" award. Kevin Jr. also delivers a speech but he is clearly unhappy. While on a smoke break, he is approached by his father, who tells him he understands the disillusionment with life that he's feeling, but he has no choice except to make peace with his lot in life. After the party, Laurie tells Kevin she cried at the dog breeder's and Kevin vows to go with her to purchase a puppy. Nora is annoyed when her husband returns home late from work and shows no interest in how her job interview went.

The next morning - the day of the Departure - Kevin wakes up early, still bothered by something. He goes for a run. Laurie wakes Tommy up and he confesses that he and Kevin confronted Michael the day before. While Kevin is on a smoke break, a car pulls up beside him with four women inside. One asks him "Are you ready?" but when Kevin is confused, they tell him they had mistaken him for someone else. Shortly after they drive off, Kevin is nearly struck by an exploding manhole cover. He races home to tell Laurie, but she only notes the cigarette smell on him. She says she doesn't care if he smokes, but is annoyed by the lie. She asks why he didn't tell her about Michael, after Tommy told her about their confrontation, and Kevin said he didn't feel it was his place to tell. Laurie asks him what he feels his "place" really is within the family and Kevin reveals his resentment for their life. He tells her he never wanted a dog and when Laurie is unsympathetic to him receiving a call about the wild deer, he tells Laurie to fuck off.

Kevin races to the house where the deer has rampaged to. He prepares to tranquilize it but it is too quick and powerful. It races outside and is hit by a car. The woman driving is shaken but unharmed. Kevin notices an "It's a girl" balloon is stuck to its antler. He puts the deer down and the woman's car is towed. Kevin offers to drive her to her nearby motel. She asks him if he's a good guy and Kevin says he is not, so she invites him inside. They begin to have sex. Meanwhile, Laurie drives to her doctor's appointment. On the way, Sam's Mother pulls up beside her, with Sam crying in the backseat.

In the doctor's office, Matt's wife Mary Jamison greets Laurie and thanks her for the party the previous night. Laurie asks why they're at the doctor's and Mary explains Matt's cancer might be back. She is overjoyed when his tests are clear and offers to drive home as they leave.

Laurie receives an ultrasound and becomes emotional upon hearing the baby's heartbeat. Jill and Tommy are at the science fair and they agree their parents are about to split up. Tommy drags Jill into participating in a human circuit experiment, where a small group links hands to make a light switch on. Nora is agitated when Doug won't help prepare breakfast while her children loudly demand food. Nora yells at her daughter when she accidentally spills orange juice on her phone, just as Lucy calls her back regarding the job. Nora storms into the kitchen to salvage her phone while Doug comforts a crying Erin.

As all of these events happen simultaneously, the Departure occurs. Nora's husband, son and daughter vanish, leaving her standing alone in the kitchen. The woman Kevin is having sex with vanishes, leaving him staring stunned at the now empty bed. One of the children participating in the circuit vanishes, leaving Tommy and Jill looking confused and afraid. In the episode's final scene, after being distracted by a nearby scream, Laurie looks back at her ultrasound only to find her baby has vanished.

This episode features several callbacks to prior episodes, including:

Retrieved from "https://the-leftovers.fandom.com/wiki/The_Garveys_At_Their_Best?oldid=8214"
Community content is available under CC-BY-SA unless otherwise noted.