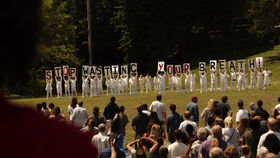 "Pilot" is the first episode of Season 1, and overall the first produced hour of The Leftovers. It originally aired on June 29, 2014.

Three years after millions of people – some 2% of the world’s population – vanished into thin air, residents of Mapleton, NY weigh the pros and cons of a “Heroes Day” tribute to the local “Departed.” Attempting to maintain a sense of normalcy in his strained community, police chief Kevin Garvey faces additional challenges at home with his daughter, Jill, who’s lost in a cloud of apathy with her friend Aimee, and son, Tom, who has gravitated to a cult led by the charismatic Holy Wayne. Also of concern is a silent, white-clad group of chain-smoking men and women called the Guilty Remnant, who team up in pairs to stake out people and places around town. As tension in Mapleton escalates, the lives of Laurie, an unexpected member of the Guilty Remnant, and Meg, a recently engaged young woman, converge.

A young mother is on the phone at a laundromat, while her baby, Sam, is constantly crying. Once at the car, Sam suddenly disappears, and chaos ensues, with cars crashing, people panicking, and the young mother helplessly screaming for her child.

Chief of Police Kevin Garvey is jogging through the streets of Mapleton as a radio broadcast lists the amount of people who have disappeared from each country. Kevin spots a wandering dog, who is suddenly shot down by a gun-toting man, who quickly gets into his van and drives off. After a shower, Kevin watches a congressional hearing in which a scientist presents a report regarding the Departure, and concludes that he does not know what happened.

At the Guilty Remnant compound, Laurie Garvey wakes up in her sleeping bag and smokes a cigarette. She makes her way downstairs for breakfast, which consists of plain porridge, and notices that she was not assigned for an upcoming activity. Not speaking, but rather communicating via writing on a notepad, Laurie demands from her superior, Patti Levin, that she be included. Patti eventually agrees. Later, the members of the Guilty Remnant gather in a circle, and are assigned a Mapleton resident whom they are to follow and watch. Laurie and her partner, Gladys, are given the file of Meg Abbott.

Kevin visits the home of Mrs. Tunny, whose dog, Dudley, was shot earlier in the day. In her front yard, Kevin notices a stuffed deer. Mrs. Tunny confuses Kevin with his father, the former Chief of Police, who is publicly known for going insane. Kevin has a flashback of chasing a nude man during the night. Mrs. Tunny, however, does not care for the dog, and states that he ran away three years ago, when her husband disappears. When leaving the house, Kevin is surprised to see that the stuffed deer is gone. He soon receives a phone call from his deputy, Dennis Luckey, informing him that he is late for the city council meeting, though he was told it would take place later on in the day. Kevin interrupts the meeting, led by Mayor Lucy Warburton, who discusses the following day's Mapleton Heroes Day, in remembrance of the Departed. Kevin warns her that the Guilty Remnant, a mysterious cult, will make an appearance and cause chaos, but Lucy ignores his warnings, and states that people are ready to feel better. Kevin angrily leaves.

At the local high school, the pledge of allegiance is ignored by the students, though many choose to participate in a public prayer for those lost in The Sudden Departure. Jill Garvey attempts to flirt with her classmate, Nick, with her failed attempt being noticed by her friend, Aimee. Later, at a field hockey practice, Jill breaks a classmate's nose after the latter kept violently tackling her. Jill is forced to apologize, but after referring to her classmate as a "cunt," she is banned from a game. After school, as Jill and Aimee smoke a joint, they are approached by Scott and Adam Frost, who invite them to come over for weed and ping-pong. After turning the twins down, they are asked about a house party happening later on that night. After the twins leave, Aimee notes that Adam is clearly interested in Jill.

In his truck, Tom Garvey intercepts a congressman who complains about the extreme secrecy of transportation. Tom retrieves a large sum of money from the congressman, takes his phone, and blindfolds him. During the ride to the compound of Wayne, a known healer, Tom tells the congressman that he will no longer feel burdened after his meeting with Wayne. When asked why he is not in college, Tom has a brief flashback of watching two students jumping off a building and crashing into two cars.

After arriving at Wayne's farm, the congressman is taken to see Wayne in a private room. Tom makes his own to the pool, where a group of Asian teenagers spend their time. He approaches one of the girls, Christine, and hands her a bag of gummy worms, which she enthusiastically accepts, and goes on to question him on the latest happening in a reality television show, ignoring a call from his father, Kevin. As Tom is clearly seen flirting with Christine, he is observed by one of Wayne's people. Following their session, the congressman leaves the room and is visibly happier, informing Tom that much like he promised earlier, he is no longer burdened. Tom, however, is ordered to spend the night at the farm, as Wayne wants to have a chat with him, which concerns Tom. Later that night, Wayne wakes Tom up, and shares with him a recurring dream he has been having, where his son prophetically warns him of an impeding judgement, concluding that "grace period's over."

Back at the Garveys', the two have dinner with Kevin, who asks them not to come to the Heroes Day parade. Aimee asks permission for Jill to take the car to the party that night, and Jill reassures him she will not drink or get arrested. Once at the house party, teenagers are shown to be drinking and smoking uncontrollably. A spin-the-bottle style game is taking place, using a phone app, which instructs the two parties to engage in a sexual or dangerous activity. While Aimee and Nick are paired together for sex, Jill is reluctantly paired with Max, and is instructed to "choke" him. Once alone in a room, the two undress, but Jill refuses to do anything sexual. Instead, Max masturbates, while Jill grabs his throat.

After Max passes out, Jill leaves the party and encounters the Frost twins, who are looking for a flashlight. Searching through the trunk of Kevin's car, the three find the corpse of the dead dog, and decide to bury it. While digging the grave, Scott ponders on what made the dogs go crazy, suggesting that perhaps the shock of seeing people disappear was the cause. They then say goodbye to the dog, as they start filling the grave.

As they leave their house, Meg and her fiancé, Darren, find Laurie and Gladys standing outside their house, watching and smoking. Ignoring them, they drive to a restaurant, where they discuss preparations for the wedding, with Meg being visibly unenthusiastic about the planning. She then notices Laurie and Gladys once again watching her from the street. Darren confronts the two, and successfully gets them to leave. Once they arrive back at their house, the two watchers are there, waiting for them. Meg violently screams at them, slapping Laurie, who does nothing in return. Darren constraints Meg, and leads her back inside.

Kevin violently wakes up from a nightmare in which he runs over a deer, only to realize his alarm clock was not plugged in, and that Jill did not return home from the party. Walking downstairs, he finds the kitchen completely destroyed, with scratching marks covering the walls, and the door broken and open. A call from Dennis informs him that he is late for the parade.

As the parade commences, the Guilty Remnant enter their vans and head towards the park, where the parade will end with speeches. Prior to the beginning of the closing remarks, Reverent Matt Jamison vocally protests that the Departure was not the Rapture, was those who disappeared were sinners, and enthusiastically hands out his tabloid papers. Kevin asks him to stop, when he notices that Jill is among the attendees. Kevin is visibly upset with her not returning his car, and as Jill informs him that she buried the dog in his trunk, Mayor Warburton prepares to begin her speech. Following the unveiling of a statue crafted especially for the occasion, Warburton invites to the stage Nora Durst -- a Mapleton resident whose entire family Departed. As Nora recounts her memories with her family, the Guilty Remanent appears from the tree line, carrying posters with single letters that form the message: "STOP WASTING YOUR BREATH."

This public display angers the crowd, who engages in a physical attack again the members of the G.R., who do not fight back. Kevin and his police force separates the two sides, defending the G.R. members from the rest. During the commotion, Kevin defends Laurie from a violent man. Warburton, who ignored Kevin's warnings, looks in dismay. Later that evening, at the Carpe Diem pub, Kevin chats with the young mother whose son, Sam, disappeared three years ago. When asked where he was during the Departure, Kevin has a brief flashback of having sex with an unidentified woman. Instead, he says he was simply at home. He then notices the same dog shooter from yesterday leaving the pub; Kevin, clearly intoxicated, pulls his gun but fails to shoot the driving van.

Kevin once again tries to call Tom, who at that moment dove naked into the pool in Wayne's farm, inaudibly screaming in the water. Kevin makes his way to the Guilty Remnant cul-de-suc community, where he demands to speak to Laurie. After assaulting a member of the G.R., Kevin is told by Patti to leave the premises; however, Kevin begs Laurie to come back home, revealing she is his wife. Kevin is then attacked by the same member from before, and thrown against his car. As Kevin drives off, Meg arrives in a taxi, asking if she could stay there for a couple of nights. Patti breaks her silence, welcomes her to the community, and pairs her up with Laurie. However, she warns Meg they will never speak again.

Driving through the streets of Mapleton, Kevin halts his car when he sees the deer from Mrs. Tunny's yard and his dream. Coming face to face, Kevin asks the deer if he was at his house last night. Suddenly, a pack of wild dogs appear, chase the deer, and eventually catch up with it, mauling it into pieces. The dog shooter appears with a rifle, explaining to Kevin that these are not their dogs anymore. Kevin asks him if he is awake, and the man replies, "You are now." The man starts shooting the dogs, and invites Kevin to join him, which he angrily does.

Retrieved from "https://the-leftovers.fandom.com/wiki/Pilot?oldid=8208"
Community content is available under CC-BY-SA unless otherwise noted.