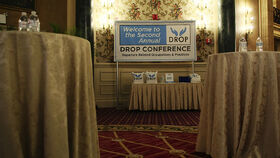 "Guest" is the sixth episode of Season 1, and overall the sixth produced hour of The Leftovers. It originally aired on August 3, 2014.

Nora takes care of unfinished business in Mapleton before heading to New York for the Second Annual DROP conference (Departure Related Occupations and Practices). Upset that her ID has been pinched, she scours the convention for her imposter while wearing a “Guest” badge, and ends up getting detoured by an amorous salesman, a best-selling author and a rogue attendee.

Retrieved from "https://the-leftovers.fandom.com/wiki/Guest?oldid=8252"
Community content is available under CC-BY-SA unless otherwise noted.