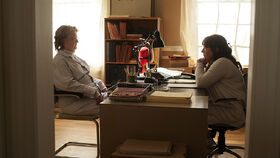 "Gladys" is the fifth episode of Season 1, and overall the fifth produced hour of The Leftovers. It originally aired on July 27, 2014.

Laurie’s resolve is put to the test in the wake of a brutal hate crime. After his latest initiatives to maintain the peace in Mapleton fall short, Kevin turns down an outside offer to rid the town of its problems. Matt brings his pulpit to the street. Meg takes on a new role.

Retrieved from "https://the-leftovers.fandom.com/wiki/Gladys?oldid=7877"
Community content is available under CC-BY-SA unless otherwise noted.