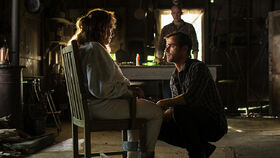 "Cairo" is the eighth episode of Season 1, and overall the eighth produced hour of The Leftovers. It aired on August 17, 2014.

Kevin fears he’s losing touch with reality after inexplicably finding himself in a difficult situation involving Patti Levin, a leader of the Guilty Remnant. Meg loses control during another encounter with Matt; Jill confronts Aimee about her relationship with Kevin; Nora stands up to Laurie, and finds her privacy invaded.

Retrieved from "https://the-leftovers.fandom.com/wiki/Cairo?oldid=8211"
Community content is available under CC-BY-SA unless otherwise noted.